Hybrids – Are you getting what you pay for???

There is a lack of knowledge on the types of lovebirds and hybridization is rife, particularly among the eye ring species. This article should hopefully make things a little clearer for the beginner to ensure they are buying pure birds.

You should always buy your stock from a reputable breeder or pet dealer to ensure you are getting what you pay for. You will find that these will offer better value than other pet stores. Just because a pet store is a large chain that has a store in a shopping mall does not mean the staff will have knowledge of what they are selling you. Do your research before you buy.

The ethics of genetic purity is a different debate altogether, but ask yourself why would you pay top dollar for a hybrid when you are being told it’s a pure bird? It’s a bit like buying a purebred dog with papers only to find it is crossed with something else.

Crosses between eye ring ( Masked, Fischer’s, Nyasa ) and Peachfaced are quite easy to spot but inter crosses between the eye rings can be harder to spot to the untrained eye. The descriptions here refer to the normal or wild type colouration.

Hybrids can still be attractive birds but the colours tend to be duller and the birds are less striking than the pure form. These are suitable as pets only. Under no circumstances should they be used for breeding. Eyering/Peachfaced crosses are normally sterile mules but inter Eyering crosses are fertile.

Species should also not be kept in a mixed colony so cross breeding cannot occur. Should accidental cross breeding occur any offspring should be destroyed.

The most common form of hybridization but also the hardest to pick for the novice buyer.

The Fischer’s has a bright reddish/orange band around the forehead, cheeks and upper breast, fading to yellowish on the lower breast and green belly. Excessive darkness through the forehead, cheeks or head can indicate a hybrid. The breast should also be predominantly orange; too much yellow can indicate a hybrid. There should also be no yellow collar around the neck.

The masked must have a pure black head; any hint of colouration in the fore head, excessive orange in the breast feathering is a good indication of a hybrid.

Nyasa crossed to Fischer’s or Masked:

Any darkness in the head or cheeks. The rump should be pure green; any colour in the rump indicates hybridization with Masked or Fischer’s. The beak should be white at the top, fading to red where Fischer’s and Masked have a pure red beak.

Looks nothing like either species of bird. A peachfaced should also have no black in its face or head. Any hint of pink, redness or orange in the beak is usually a give away. (Do not be confused with young birds that have a darker coloured beak with some black near the top)

The Photo presentation will hopefully give you a clearer picture of what to look for, comparing the hybrid birds with the pure strain. No two Hybrids will look the same but there are some characteristics to look for. 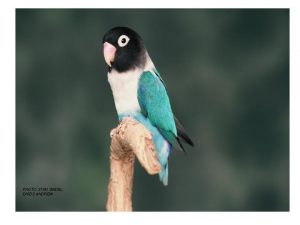 The head is neither jet black like the masked, nor the forehead and cheeks white like the Fischer’s, retaining a somewhat muddied and less brilliant appearance when compared to the pure form. 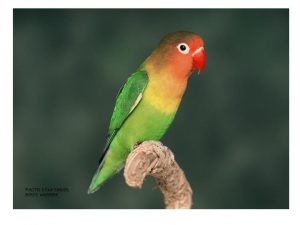 The bottom picture shows a Normal Fischer’s. Note the red/orange forehead and cheeks, fading to yellow breast and green body.

The head is slightly darkened and the cheeks are orange.

These are mature birds, young birds that have not fully coloured may not be as bright. 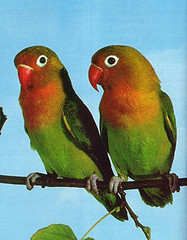 These birds may look like masked but they are crossed to Fischer’s. The head is not jet black but look washed out with a suffusion of orange feathering. The chest and collar are not yellow but have a high proportion of The birds on the left have a slight orange coming though on the forehead orange coming though in the breast and are somewhat duller than the pure form. 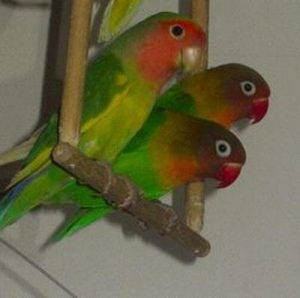 These birds appear to be Fischer’s but are crossed to Masked. The birds on the top are shown with a pied Peachfaced. Note that the heads are too dark, the cheeks are dark and there is no bright reddish/orange on the forehead. Again the birds on the bottom are discoloured with dark head and cheeks, lack of bright reddish orange on the forehead. The general appearance is muddied and less brilliant than the pure form. 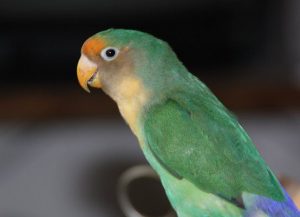 These are the easiest Hybrids to spot. The bird on the top is a blue peachfaced. Note the absence of any black on the head and the horn coloured beak.

The bird on the bottom is a Hybrid between a Blue Peachfaced and a Blue Masked.

Note the black in the cheeks and the red-apricot colour on the bib.

Also note the reddish tinge to the beak.